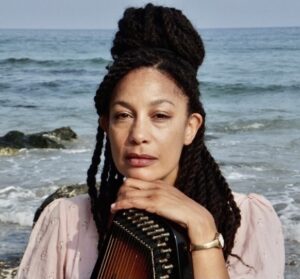 Angeline Morrison is a vocalist, songwriter, multi-instrumentalist and morris dancer based in Cornwall, who believes in the inherent beauty of sad songs. Angeline’s homespun sonic aesthetic, deeply emotive writing and layered vocal harmonies are all stitched together to make small, tender, often dark stories in song.

Currently she is working on “The Sorrow Songs: Folk Songs of Black British Experience”, an album to tell the stories of ordinary and extraordinary lives of the historic UK black population through folk songs. Tradfolk.co has the release of this album as one of its highlights of 2022.

Angeline’s music has been played on BBC Radio 2, BBC Radio 3 (Late Junction), and BBC 6 Music (Gideon Coe, Lauren Laverne, Cerys Matthews, Stuart Maconie’s FreakZone). You will hear her work in the Netflix series Atypical, in US detective series Ray Donovan, and in a major Hollywood movie, amongst other places. She has also performed as part of unorthodox alt-folk duo We Are Muffy, half of psych-folk duo Rowan : Morrison, as beat-folk-noir The Ambassadors of Sorrow, or as half of 1960s soul revivalists The Mighty Sceptres.

‘The Brown girl and other Folk Songs’ released in May 2022, was awarded Folk Album UK of the month by The Guardian, with two of this album’s songs being played on Invisible Folk Music.

‘The Sorrow Songs’, produced by Eliza Carthy, will be launched at Cecil Sharp House on 22nd October by the Sorrow Song Band, which includes amongst others Granny’s Attic concertina and melodeon player Cohen Brathwaite -Kilcoyne. The band will be touring during October Black history month. The album has received a brilliant review by Jude Roger in the Guardian, and her ongoing research into how black people have been described in Folk music has been discussed in an interview with Angeline on “Women and Folk music” on Woman’s hour, Radio 4.