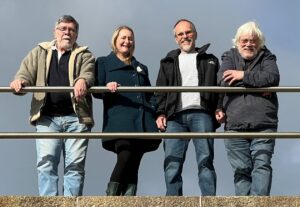 Baldrick’s Plan are an exciting, four-piece folk band, specialising in strong harmony singing, largely based within English traditional music, but also embracing songs, ancient and modern, from other backgrounds and traditions. They are based in West Cornwall and are all seasoned performers on the folk music scene. While material tends to be delivered ‘a capella’ style, there are often songs that the band would like to do which demand instrumental accompaniment. So, where appropriate, they have developed, alongside their unaccompanied material, a considerable body of songs which are accompanied by a combination of guitar, Portuguese guitarra, whistle and fiddle.

If you’re interested in finding out what Baldrick’s Plan are about, and what they sound like, please visit the Samples page, where examples of their music can be heard.

What they’re saying about Baldrick’s Plan:

“I saw this band at the Penzance Singing Cellar Session and was reminded just how good they are – magical harmonies, thoroughly professional and worth a gig anywhere!” Geoff Lakeman, Folk singer, musician, songwriter (and CFF patron!)

“A wonderful addition to the Cornish Folk Scene – Not to be missed” Roger Bryant: Singer/Songwriter

“A bonus for any festival – another surprise package from the other side of the Tamar” Steve Gill, Chairman Teignmouth Folk Festival

“Baldrick’s Plan thrilled a Bodmin Folk Club audience with their strong harmonies over a whole range of songs. The three blokes like to have fun at their gigs, and so does the audience. This was their first visit to Bodmin and I feel certain it will not be their last.” Mike Fremantle, Organiser Bodmin Folk Club