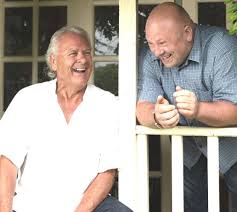 A Cornishman who has lived on Dartmoor for 40 years, Geoff has been described as “a stalwart of the West Country folk scene and the father of a virtual folk dynasty.”

He’s the dad of Sean, Sam and Seth Lakeman, who are all internationally renowned folk musicians. And he’s a patron of the Cornwall Folk Festival. Geoff is a leading exponent of the rare Crane Duet concertina. He teases English and Irish folk, Americana and jazz songs out of this vintage instrument. West Country songs, English, Irish and Scottish folk and other music as varied as Jimmie Rodgers, the Louvin Brothers, Richard Thompson and Randy Newman, plus some self-penned gems.

His smooth tenor vocals and unique concertina accompaniment have won him plaudits and fans over the years, but it has only been since retiring from a long career as a Fleet Street Journalist that Geoff has truly spread his wings musically.

As both live on Dartmoor, it was inevitable he’d join up with Rob Murch. Rob’s percussive finger-ballet up and down the fret board of his 100-year-old banjo is mesmerising. He’s revered throughout the UK for his long-time work with the renowned Dartmoor Pixie Band and The Watch trio.

The duo’s relaxed yet sparkling stage presence together is bubbling with the “feel -good” factor.