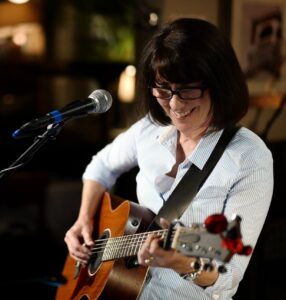 Originally from Merseyside, now based in Surrey, Louise is an indie-folk singer-songwriter with a wistful, engaging style.  Her music is inspired by her own experiences and the people who have shaped her life.

She was a vocalist in function bands before taking a break from music. At a songwriting masterclass, a collaboration with another course member led to a song they later developed and recorded. She continued to write and has been performing on the Surrey and Hampshire music scene for five years.

A regular at the renowned GT Live Sessions in Guildford, other high-profile events including Music At The Pottery (Farnham), The Loft (Basingstoke), The Fiery Bird Acoustic Sessions (Woking), and local festivals Weyfest and Staycation.

Her recent single “Cornish Blue” was recorded with critically acclaimed singer-songwriter Boo Hewerdine and she is currently recording an EP for release later this year.