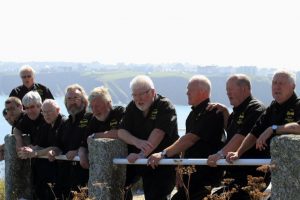 All members of Newquay Male Voice Choir, Oll an Gwella are a rehearsed, a cappella, male chorus with a repertoire consisting of over one hundred songs including shanties, Cornish folk, 1960s classics, seasonal and sacred music.

Combining their four-part harmony with infectious humour, the group has earned wide acclaim for their extensive repertoire. Each year they perform ‘Songs about the Sea’ at the International Shanty Festival in Falmouth and Newquay Fish Festival, and have helped celebrate a century of the RAF, sung mining songs at Pendennis Castle, at a Cornwall Council-hosted reception to recognise minority Celtic languages, and more, whilst raising thousands of pounds for local charities.

In 2016 they represented Cornwall at Festival Interceltique in Lorient, Brittany. In a 12-week period in the summer of 2018, they showed their versatility, with lyrics in Cornish, Welsh and French at the Royal Cornwall Agricultural Show, on a sea-shanty cruise down the river Fal, at Gorsedh Kernow, auditioned for Britain’s got Talent, sang in Pontypridd and opened the main stage at Boardmasters. This is a busy, in-demand group of singers!