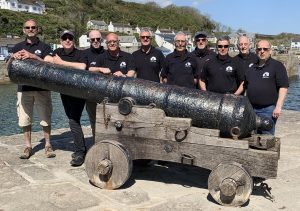 Bryher’s Boys formed back in 2017 when the tenor and bass sections of several Cornish choirs were press ganged to form a new crew especially designed to navigate the choppy waters of Sea Shanty singing.

Their collective love of the established folk repertoire, both nautical and Cornish, proved an immediate hit with West Cornwall audiences, and they have clocked up almost 200 performances to date in venues as diverse as private parties, weddings, crowded pubs, festivals, community events, large scale concerts – even aboard the Royal Fleet Auxiliary ship Lyme Bay!

Named after bandleader Trevor Brookes’ youngest daughter, Bryher, the Boys do not hail from the Scilly Isle of that name, but come from all over West Cornwall, from Newlyn to Truro.

The group are proud to have been selected to officially represent the Duchy of Cornwall at Europe’s largest music festival, Festival Interceltique Lorient, in 2019, taking their unique mix of traditional Cornish songs, shanties and shaggy dog stories to a new audience of more than 800,000 attendees, singing to 9,000 people at a time.

Last year, they recorded and released their first CD, ‘The Ballad of the Boy Jacq’. Most recently, in 2021, their music reached an audience of over 1.5 million viewers on national TV, accompanying celebrity chef Rick Stein on episodes of his new series, Rick Stein’s Cornwall.