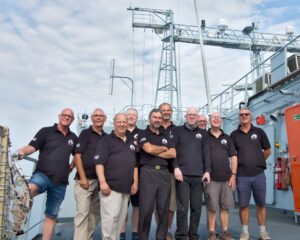 Bryher’s Boys was formed back in 2017 when the Tenor and Bass sections of several Cornish choirs were press ganged to form a new crew especially designed to navigate the choppy waters of Sea Shanty singing!

Their collective love of the established folk repertoire, both Nautical and Cornish, proved an immediate hit with local audiences, with over 200 performances clocked up to date in venues as diverse as weddings, private parties, crowded pubs, community fundraisers, festivals (most recently representing Cornwall at Festival Interceltique Lorient 2019 and Yn Chruinnaght 2022) — even afloat aboard the RFA Lyme Bay!

Named after Bandleader Trevor Brookes’s youngest daughter, Bryher, the Boys do not hail from the Scillies themselves, but are based firmly in West Cornwall, spread out from Newlyn to Truro.

In 2021, Bryher’s Boys’ music reached a national audience of millions, being featured in two episodes of the hit TV series “Rick Stein’s Cornwall” and they were involved in the G7 Summit activity, being asked to compose and perform an updated new “G7 Shanty” for Reuters News Agency, singing it live on the BBC National and Worldwide News Channel, which boasts an audience of over 70 Million!