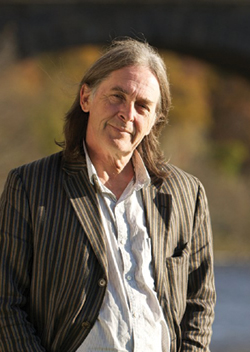 Songwriter, composer and performer extraordinaire, Dougie MacLean is a star of concert halls and festivals all over the world, including New York’s Carnegie Hall, London’s Festival Theatre and the Sydney Opera House.

His songs have been covered by artists including fellow Scots Paolo Nutini and Amy MacDonald, Irish greats Ronan Keating, Mary and Frances Black, Dolores Keane, Deanta and Cara Dillon, and Grammy award-winning US country singer Kathy Mattea. Caledonia topped the Scottish charts and become a Scottish contemporary anthem. His music has been used by Hollywood and he has been the subject of three BBC TV Specials.

He has an OBE, two prestigious Tartan Cleff Awards, been inducted into the Scottish Music Hall of Fame and given a Lifetime Achievement Award by the BBC.

“Strong yet subtle, hauntingly evocative yet contemporary in feel, this music demands listening to over and over again” (The Performing Songwriter). “A musical hero.” (Wall Street Journal).

Second act to be confirmed.