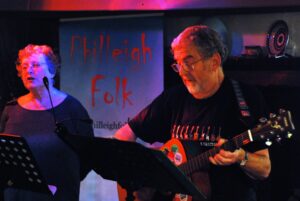 Farrell Family as their name suggests, are a family-based band who sing in the English, Irish, Scottish and Cornish traditions, and who operate out of SE Cornwall and Plymouth. This year, for various reasons, they are represented by the senior members of the band only, namely Eddie Farrell and Maggie Cranston.

As a great deal has happened, not just in the Folk world, since they were last at the Festival, this year Eddie and Maggie will be performing an “Absent Friends” set, involving tributes to John Prine, Sonny Ramadhin (oh yes!), and the great Mike Walford.