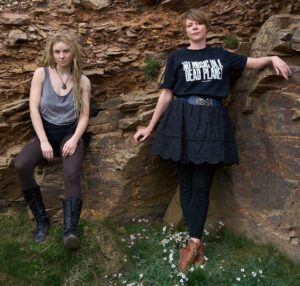 Cornwall singer-songwriters Lizzie Freeborn and Amy Woodburn are a cross-generational duo formed in 2020 to offer a musical response to the climate crisis.

They combine cinematic arrangements, dynamic harmonies and sultry grooves to sing the case for life on earth.

Since their 2020 debut they have featured on BBC Introducing, Music Declares Emergency, The Conscious Festival, FATEA and Climate Live, and received critical acclaim from eco and music press around the world. ISYLA have performed for Climate Live, VOXJAM and made their London debut at the iconic Bedford venue in 2021.

The album ‘Of Blood And Star’, came out on Earth Day (22nd April) and follows the success of their 2020 release ‘Where She Walks’.

ISYLA bridges the gap between commercial, alternative pop and climate activism within music. They have provided an easy introduction into eco, social and environmental changes in an inclusive form as they focus on the heart of what matters. Singer Lizzie expresses her inner thoughts not just through her voice but also through fire dancing as a way she connects with the elements of the world.

Their song ‘Invincible Heart’ is a call for unity and celebrates a spirited approach to life, love and the incredible connections humans make that power us all on our journeys.’