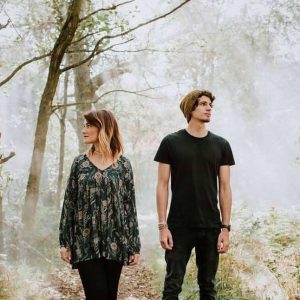 Cornwall based indie duo Our Atlantic Roots (Mac and Laura Johnston) bring an uplifting blend of American and British alt-folk, with harmonies that are rich, dynamic and unite beautifully. Their sound isn’t something you could squeeze into one genre ‘box’; certain songs have a clear connection with the country/bluegrass sound, whereas others are delicately stripped back, acoustic alt-folk style tracks.

They met in Asheboro, North Carolina in August 2012. Just a few weeks after meeting, Mac and Laura sat down to write their first song together and straight away people commented on the way their voices and styles complimented each other.

In 2014 the duo married and relocated to the UK. September 2017 saw the release of Mac and Laura’s debut EP ‘First Light’ recorded with award-winning folk producer Andy Bell.

In 2019, the duo released their second EP ‘Little Bird’, which has since had over 600,000 streams on Spotify. Tracks ‘Little Bird’, ‘Carry On’ and ‘Wildflowers’ were also featured on popular indie/folk playlists by ‘AlexRainbird Music’, resulting in millions of plays for these songs on this popular YouTube channel.

Recent media appearances (2020) include singing live on both BBC Radio Devon and Cornwall and local BBC News, as well as a feature on BBC Songs of Praise. In 2019, the duo won two international song writing awards judged by Grammy, Emmy, CMA & Brit award winning judges for their song ‘Carry On’.