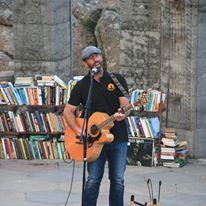 Will can often be found singing with a Falmouth based, male vocal group known as The Oggymen, who are highly regarded for their sense of humour, beautiful four part harmonies, and heartfelt songs.

In 2016, Will took the decision to also try his luck at gigging alone with acoustic guitar and stomp box. Totally inspired by Cornwall’s rich history and heritage, and the songs penned by his mentor Harry “Safari” Glasson, he hit the road! Will combines Harry’s music, his own compositions, and traditional Cornish and Celtic folk songs, receiving accolades from far and wide.